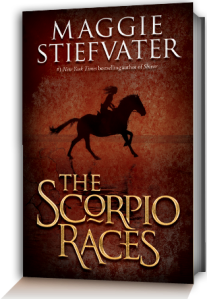 If I told you that the most exciting novel I’ve read this year is about man-eating water horses, and is actually written for the young adult market, what would you think?

I loved The Scorpio Races by Maggie Stiefvater so much I have read it twice in the space of a month. The first time I raced through it, devouring it, unable to put it down; the second time was a more leisurely read, appreciating the language, the characters, the nuances. I was swept into Stiefvater’s very convincing world of the island of Thisby, somewhere, it seems, off the Atlantic coast of Ireland.

For me the mark of a compelling novel is one that leaves you breathless at the end, believing wholeheartedly in the plot, the characters, the location; while I am reading it, I live in that world. Sometimes it takes me a few days to pick up another novel if one has made such a huge impact on me. The Scorpio Races is one of those books. It doesn’t matter that it was written for the teen market and I was out of my teens more years ago than I like to think about. A good novel is a good novel.

Here’s the official blurb on the novel from Maggie Stiefvater’s website:

“It happens at the start of every November: the Scorpio Races. Riders attempt to keep hold of their water horses long enough to make it to the finish line. Some riders live. Others die.

At age nineteen, Sean Kendrick is the returning champion. He is a young man of few words, and if he has any fears, he keeps them buried deep, where no one else can see them.

Puck Connolly is different. She never meant to ride in the Scorpio Races. She is in no way prepared for what is going to happen.”

Both Sean and Puck  – well-developed, finely-drawn characters – tell the story in the first person, in alternating chapters. This works superbly as I don’t think the book would be as engaging if it was in the third person or simply with one narrator and one point of view.

Thisby as a place is believable. Windswept, stormy, isolated, and the chosen land for the capaille uisce, the water horses, to emerge from the surf in October. Leading up to the Races there is a festival which Stiefvater makes more realistic with the invention of November Cakes, the island’s sweet delicacy. They don’t exist in the culinary world, but Stiefvater kindly provides the recipe for her creation at the end of the book. I sense some inbreeding in some of the characters, and Puck makes an observation that the eyes of the tourists are much closer together than those of the island people. It all adds to the reality of the world Stiefvater has created.

The capaille uisce themselves are drawn from legend and mythology. Stiefvater’s animals look like normal horses, but prefer a bucket of blood to a bucket of grain.  (It’s a lovely touch when Stiefvater talks about the pong of the water horses’ manure. Imagine a dog turd the size of a horse dropping-!) They are responsible for death and violence; they kill men for food, they are apt to view normal horses as a meal rather than a mate. There is savagery in their portrayal, but Thisby is such a place that Puck and Sean speak of the water horses’ behaviour in a matter-of-fact way. These people are island born and bred; they have grown up with death. Having said that, the horses, in their way, are nicer than some of the humans in this book.

This is a book with timelessness – the action could have taken place any time in the last forty or so years. There are no mobile phones, no computers. Few people on the island drive cars. The mainland, which calls a siren song to young adults looking for work or something more exciting, is only accessible by a ferry journey of several hours.

Had this book existed when I was a teenager, I suspect it would have become my favourite – well-thumbed, read over and over again. Pony book lover that I was, this is unlike any pony book I ever read. I’m not sure that it quite makes it into the pony book category, but blurs the categories between horses and fantasy.

My verdict? Bugger the vampire books – read this instead.

(I read this book on Kindle from Amazon).

Anyone who starts reading Cobbler’s Dream expecting to find themselves in the world of tv’s Follyfoot (the 1970s YTV show was inspired by the book) is going to face a harsh reality. Yes, it’s about a rest home for horses and the dysfunctional group of people who work there, but this book wasn’t written for children, unlike Dickens’ later works based on the tv show (Follyfoot, Dora at Follyfoot, The Horses at Follyfoot, Stranger at Follyfoot). Familiar names are there though: Dora (a much chunkier, horsier girl than the tv version), The Captain (the Colonel for television), Slugger and Ron Stryker.

Dickens had strong humanitarian involvements and at the time of writing her 1963 book Cobbler’s Dream she was an active supporter of the Royal Society for the Prevention of Cruelty to Animals (RSPCA). Cobbler’s Dream explores cruelty and sadism; images in the book are intended to shock the reader and raise awareness of the plight of mistreated animals.

For example in the first chapter a man and girl visiting the Farm meet “a farmer’s horse stolen out of a field, ridden all night by a gang of boys with a piece of wire in his mouth for a bridle, and left torn and bleeding in a gravel pit with half his tongue gone.”  The girl looks sick when she learns this. The man is merely keen to move on and get to the pub for dinner. Dickens is pointing out the way society conveniently ignores that which is unpleasant to it.

The title of the book refers to a champion show jumping pony, Cobbler’s Dream, who is rescued in Chapter 2 by his groom Paul. The pony’s twelve-year-old owner has beaten the horse severely, enough to cause blindness in one eye. The family who own the horse intend to sell him to the knackers; Paul steals him and finds his way to the Farm. (In Cobbler’s Dream, the home of rest for horses is simply ‘the Farm’; the name Follyfoot was coined for the tv show and subsequent books.)

If there is cruelty, there is also sentimentality. This book uses plenty of hooks to engage the reader’s emotions, not least a scene where Paul finds a horse locked in a narrow shed, standing on a solid pile of manure with its head sticking out the roof: “‘Oh God.’ His heart was flooded with a surge of rage and pity so intense that he clenched his fists and stood there for a moment trembling, his eyes closed against tears. When he opened them, the hollow, suffering eye looked into his, and he knew that the horse was his child, his treasure, his dearest care.”

This can be an uncomfortable novel to read for animal lovers; man’s inhumanity to animals is described in more detail than in the successive books in the Follyfoot series. Despite one of the main characters being twelve years old (Callie), Cobbler’s Dream could give a twelve year old reader nightmares. As adolescent and young adult fiction, however, it ticks idealistic boxes and is a powerful reminder that we as a species are responsible for the welfare of others. Almost fifty years after initial publication, it provides a view of Britain that has long gone: pit ponies, circus horses, horses who work for a living pulling carts and vans. For the mobile phone generation, or readers graduating from The Saddle Club, this could prove to be a hard novel to get into, but it’s worth persevering. The characters are well-drawn and where there is darkness there is also light just a little further on.

Cobbler’s Dream is an episodic novel; there is no galloping towards a big climax, instead there are a series of peaks and troughs, of struggles and successes, of horses lost and horses saved, the final episode involving the title horse himself.

The Farm is also the saviour of unwanted people who, like the horses, end up calling it home: Paul, Callie and her mother Anna. All Dickens’ characters develop over the course of the book as we learn more of their back stories; there is no long description when we first meet them, their stories are woven effortlessly into the narrative. They have no compunction about breaking the law to save an animal, either. Both Paul and Callie steal horses to give them a better life at the Farm. The human story lines work around the animal ones and resolve by the end of the book.

Uncomfortable it can sometimes be, but Cobbler’s Dream is compelling reading. Dickens writes beautifully; at times economical, at times with that wry touch that makes you smile and admire her craft as a storyteller.  Her love of animals and her knowledge of horses makes this an authentic book with a lot more depth than her Follyfoot series which followed.

Cobbler’s Dream is currently out of print but you may find it online on eBay or second-hand booksellers – or even your local church fete or jumble sale. Other titles in the Follyfoot series are being progressively reprinted; it remains to be seen if Cobbler’s Dream is considered too ‘adult’ to be reprinted as a children’s book.